This is Marmalade, a.k.a. Toad:

Yes, it’s one of those serendipitous photographs. Most of the time she looked like a perfectly normal, vaguely annoyed cat. She was a beauty, really; she’d sometimes get knots in that coat, but it was silkier and smoother than the coat of many long-hairs I’ve known. And all the color: black and brown and gorgeous orange and bits of cream here and there.

But she was not the friendliest pet on the planet.

She chose us, as animals sometimes do. A few days before the 2008 ice storm, she showed up on our doorstep, thin and covered in bloated tics, hollering her lungs out. We took her in, warmed her up, and gave her food and a litterbox. We took her to a vet, who removed the tics, checked for a chip, gave her a bunch of shots, and sent her home with us. We called a couple of no-kill shelters in the area, but they were full. We put up some flyers: no response.

So she was ours, and I was leery at the start, because she was so non-social. Not like a feral cat—she’d clearly lived with humans before, and not only because someone had declawed her—but like an animal who preferred the company of no one. She was not a lap cat, she did not like being picked up, and although she liked, on occasion, to be petted, she would not put up with it long. And when she was finished accepting whatever attention you paid her, she would let you know, with a loud, constant, Siamese-level wail that didn’t seem to require any breathing on her part. She was, perhaps, part bagpipe.

To my daughter, who was less than five when Toad joined us, she was just another big fluffy kitty. She would pet her, and pick her up, and listen to her howl. When Toad howled, my daughter would talk to her lovingly. When Toad was really done, she’d bite—but gently. A mama telling her kitten to knock it off. Some cats, I have found, seem to understand about young humans.

When my daughter got older, Toad would greet her in the morning, jumping up on the bed and purring, succumbing to a little affection. At night she would jump up and stay on the bed until my daughter went to sleep. If she woke in the middle of the night, Toad would go to her to check.

This is what is missed the most: Toad’s routine. Her caretaking. Her grumpy, howling, resentful caretaking.

People describe her as an unusually bad-tempered cat. I suppose she was. My old Siamese could be a grump, but she was nothing compared to Toad. I loved that about Toad. She took what she wanted, and when she was done, she let us know. She’d insist if she had to. She knew herself, and her tolerances. She let us take care of her just enough, but no more.

I think one reason I’ve mostly had cats instead of dogs is that I love this aspect of the feline nature: “Sure, you’re upset, fine, here’s some rubbing and some purrs, now stop making that damn noise because shouldn’t you be feeding me?” That utterly unabashed self-centeredness. Genuine affection, but no neediness.

The best guess for what got her is FIP. There was no way to test for it while she was alive, but all of her symptoms fit: digestive issues, lethargy, jaundice, paralysis. We treated symptoms as best we could, but she faded so fast. I fed her through a tube for a week and a half, and in the end she couldn’t even keep anything down that way. Ten years old, and we had to let her go.

I’ve lost pets before. That’s the life of a pet lover: unless you get a tortoise, you’re going to be saying goodbye to them. I lost my Siamese eight years ago, and there’s still a gap in my heart. But Toad was not my cat, not really, although I took care of her at the end, feeding and medicating and cleaning and taking her to and from the vet. She was my daughter’s cat, and that made it so much worse.

There’s an instinct that parents have to spare their children pain. You try to explain the world to them, in hopes that they won’t make the mistakes that you did, that they won’t go through the same awful experiences. You can know those experiences shaped you, made you stronger, made you a better person; but you wish, somehow, you could give your child all of that shape and strength without the pain.

She will be stronger for it. And more compassionate. And more loving toward the pets—and friends—she has now. I remember my own childhood losses. I remember how they felt. So easy to see, in retrospect, that the pain meant I knew how to love.

But I still remember the pain.

I woke up that first day after Toad was gone, and I thought of all the times she would greet me: jumping on the bed, walking halfway toward my head, purring, accepting a few pets before she jumped down, lashing her tail, impatient for her breakfast. Such a lovely cat, with her bright green eyes and gorgeous tortoise shell fluff. So annoyed with everyone, always. So annoyed with needing affection. So annoyed that she loved us. 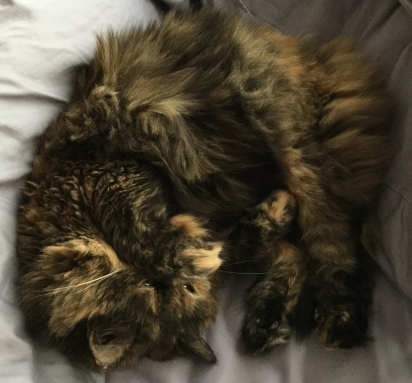 That cat left us weeks ago. The animal we kept hoping to get back was already lost to us. The time that passes between recognizing your animal is suffering and recognizing that you need to let them go is the span of realizing that the only thing you can do anymore is help them hurt a little less. After everything they give, you have to help them. They are creatures of feeling, and we owe them all of our love and compassion.

We took her to a medical facility full of people she knew, people who had cared for her and been kind. They put in a catheter, which was undoubtedly unpleasant; but after that she was curled up on a piece of my husband’s clothing, surrounded by the smells of home, with me petting her and talking to her with my familiar voice. She dozed off. I stroked her. She died, and now she is gone. She will always be gone.

We have curled around each other, me and my little family, and we will survive. We will have this shared pain to remind us that we can count on each other, that we will hold each other up when things are hard. That’s good, right? That’s a small grain of not-awfulness in all of this.

View all posts by lizmonster